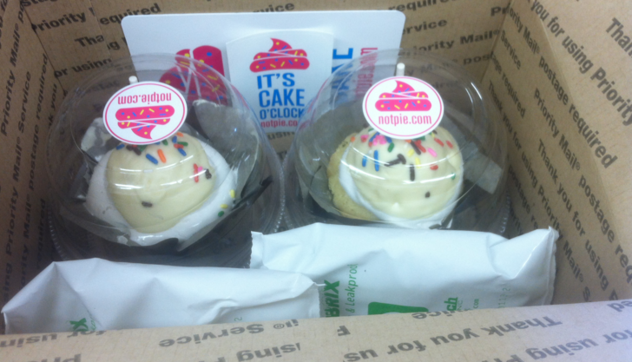 True friends happen … in a 140 characters or less. No, really.

I love Twitter. But even more than that bird and the never ending scroll of other people's ideas, I love connecting with people on Twitter.

I've met some of my most favorite people on Twitter. Turned many Twitter friends into life long friends. Even fell in love with a guy that I followed on Twitter (ok - there may be more to this story, but I did follow him and we eventually fell in love, you get my point).

Here's the deal with Twitter—Its not just a social network. It's a never ending place where you can bounce ideas around, share your thoughts (or rants, if that's your thing) get involved, link up with people that are in the same job, life stage, situation, city, hobby, sport. You name it, there are people on Twitter talking about it.

Oh wait, this wasn't a Twitter sales pitch, was it?

So you already know the NotPie story. When we dreamt up NotPie, we wanted to 1) make it super easy to send a gift 2) make it affordable (have you seen the shipping cost to send a birthday cake on some of those other sites?) 3) make it delicious. Like really delicious. Delicious enough to send to my Dad (he's pretty rad, but does require extreme delicious)

So we made the quarter pound cupcake. One giant cupcake, shipped for $15. Because who really wants a birthday card when you can get a chocolate cupcake topped with handmade marshmallow & a handwritten note delivered to your door?

Then we made the subscription. Because, well… Josh can come up with some ridiculous exclusive flavors, that need an exclusive audience. $25 for a six-pack of cupcakes that magically arrive for every month you subscribe. Pretty awesome.

And now we took this whole easy, delicious gifting to the next level.

If you are a fan of Twitter, or a Twitterer, or a tweet aficionado .. you undoubtedly have a list of favorite people you like to talk to. Or a group of people you look to, or the friends that have become like long distance family. You probably know a few of them in person, maybe even know their address. But my bet is, most of the friends and family we talk to on social media every day have no idea where each other live. We rely on social media to send virtual wishes, and pretty quickly threw real notes, cards and gifts out the window.

We just created and launched Tweet-a-Cake to solve exactly this problem. Send a delicious, giant cupcake to anyone on Twitter for $15 and you just have to know their Twitter name.

Your friend just had a baby. You've probably been following her on Twitter for more than a year, You've shared stories about your kids, given your best parenting advice, sent best wishes when she didn't feel good, encouragement when she was frustrated. You've never met in real life, but that doesn't reduce your friendship. It's time to send her a gift, but you only know her on Twitter. ummm… how's that going to work?

We tweet your friend the good news of a cupcake that is headed her way.

The cake is baked

Arrives at her door 2 days later.

Ready to send a gift through Twitter? Give it a try at notpie.com/tweet-a-cake